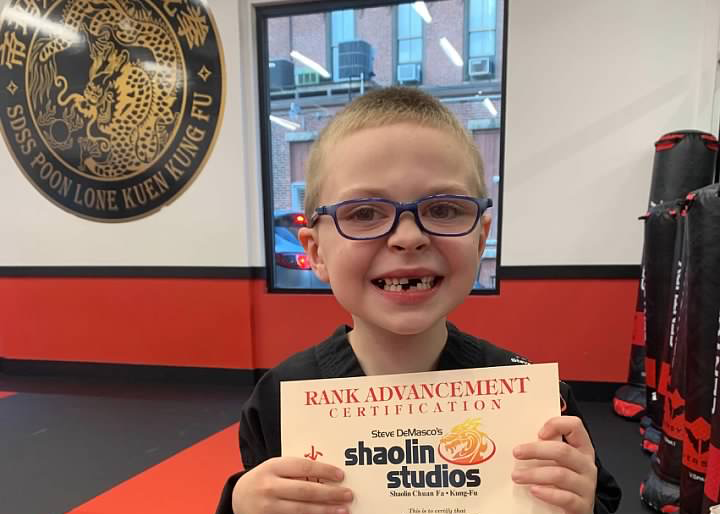 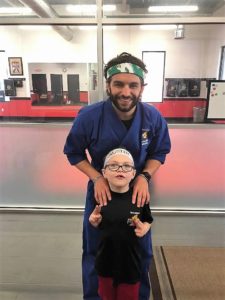 “He never lets anything hold him back,” says Austin’s mom.  Sensei Lucas says the same thing, as does Austin’s dad, his teachers, and his friends.

If you saw Austin working out in Kung Fu class, you’d say he is just like every other active 7-year-old (but maybe a little more awesome), and you’d be right.  He’s enthusiastic. He’s on fire for Kung Fu. He’s a green belt, and that’s no small accomplishment for a student this young.  He’s focused, dedicated, and talented. He’s funny, he’s incredibly nice, and he’s kind to his classmates. He hits and kicks a target bag as hard and as well as any other kid in his class.

What you may not realize is, Austin is also legally blind.

Austin is a second-grader from Natick, Mass, and he was born without peripheral vision.  Most of us take peripheral vision for granted. That’s the vision that allows us to see a ball coming toward us, or notice that our kids might be playing too close to the road, or see a mouse “out of the corner of our eye.”   His mom, Erika, describes it as “tunnel vision.” It limits his field of vision to about 10%, and only what is directly in front of him. Add to that, he was born with eye nystagmus, which sometimes creates uncontrollable eye movements. 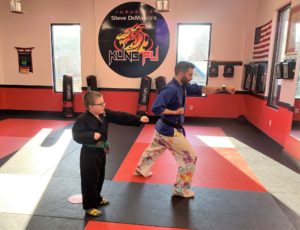 Austin working on his front punch

“Despite the fact that he knows he doesn’t see well, he never lets anything hold him back.  He was diagnosed when he was still a baby,” Erika continued. “The doctors told us to expect him to hit all his developmental milestones late.  Crawling, walking, opening cabinets, talking - they’d all be delayed. But they were wrong. Austin hit all those milestones right on time. From the day he was born, he sees every obstacle as just another challenge and he always meets them.”

Mom shared that Austin is registered with the State of Massachusetts as being legally blind.  He receives adaptive technology to help him access school. His mom, a Special Education teacher, is a passionate and knowledgeable advocate for her son.  But for Austin, this is just the way it is. “He doesn’t know any different,” Erika said. “He knows this is how he sees, and he’s trained himself to work with what he has.  My husband and I always say, he’s made us better people.” 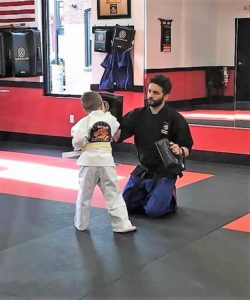 Austin as a beginner

Austin has a lot to offer the world, to be sure.  He is a kind soul with an engaging personality. He loves 2nd grade, where his favorite subjects are writing, math, and recess.  He does very well in school and is at or above grade level in every area. In addition to Kung Fu, Austin also plays center for his Pop Warner football team, and he wrestles with a local league.

He’s typically active with his peers as well.  He goes on playdates like other kids his age. He’s put together a group of friends who understand his vision issues yet include him in everything. He loves to read, he’s a movie buff, and he’s an avid Star Wars fan. He says he wants to be a professional wrestler when he grows up.  “You gotta know the moves to do that,” he says. Austin is every bit the happy and delightful 7-year-old we all hope our kids will be.

“Kung Fu is fun,” says Austin.  “Sensei Lukas makes it fun. He knows a lot about martial arts, but he also makes classes fun with things like obstacle courses and game time.”  Austin’s favorite move is #1, but he’s learning #11, #15, and #16 and that’s pretty exciting for him.

We asked him how he is able to hit a target when it is so difficult to see, and his answer was inspiring.  “I’ve gotten so used to having bad vision, that I have good vision. I’m so used to my bad vision, my tunnel vision, that it seems to be getting better and better.”  And then, with a wry smile he added, “Maybe I should eat more carrots.” 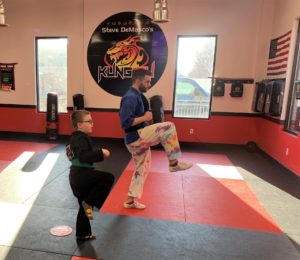 “Austin is an amazing kid, and I’m so glad he joined our school,” said Natick Chief Instructor Lukas Sisco.  “His work ethic is incredible, and he is totally committed to martial arts. But he’s also a fun, likable kid.”

We believe that Kung Fu is for everyone, regardless of age or ability.  So, what’s holding you back? Call your local SDSS studio and give it a try.