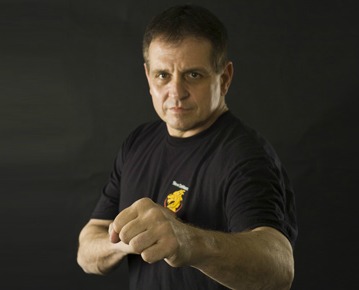 Grandmaster DeMasco was recently interviewed in the Brazilian media, related to work he is doing in South America.  He shared some of those questions with us.

When did I start training and why?

I started training in 1972 because as a former armature boxing I wanted something to do that required hardcore training and martial arts seemed to be that.

Which people marked my life in a general sense, and of these, who inspired me to pursue the martial arts?

Bruce Lee as Kato from the Green Hornet (Wikipedia)

At first, no one marked my life. Then came Bruce Lee in a weekly television show called the Green Hornet. His character was the driver for the green hornet who fought crime. Bruce Lee was his driver and bodyguard. I will never forget one of the most famous scenes where Bruce Lee jumped into the air and kicked out the light bulb on the ceiling. I saw that and that was what I wanted to do.

The next was the show that I believe was the catalyst for the popularity of martial arts around the world. It was the series called Kung Fu, starring David Carradine.  This was a show depicting Shaolin Monks and their incredible martial arts feats and techniques they were able to perform. It was totally fascinating to witness these passive Buddhist monks that could destroy any and all human beings with such a swift an precise move. It was a 30 minute TV show and I would wait for that one 10 second fight scene. I wanted to be able to do what that monk could do.

When did I set up my first martial arts studio? What studios do I have today and where?

My first martial arts studio was in Concord NH in 1979.  In the past, I became a manager and of a chain of 350 martial arts studios located in the United States, Canada, and Ireland.  Several years later I decided I didn’t want to be part of so many studios.  I felt that quality was being sacrificed for money.  So I decided to have much smaller martial arts company. I now have 15 locations in 5 US states.

In the coming days, we will continue to share portions of this very personal interview with Grandmaster DeMasco.